Escape to the 'Naki

There are days when it is just great to be alive and Monday last week was one of those days. My wife (MW) and I had driven down to Taranaki.  For those not familiar with New Zealand geography, Taranaki (also known by locals as "the 'Naki") is the large bump sticking out on the western side of the North Island of New Zealand.  It has a reputation for being a bit of a wild and unique place, mainly because it seems to get the first dose of whatever weather comes across the Tasman Sea and hits NZ.  Slap bang in the middle of the province of Taranaki is the large old volcanic cone of Mt Taranaki that dominates the region.  There is old Taranaki saying that when you can see the mountain it is about to rain and when you can't see it, it is raining. Taranaki is one of the finest dairy farming areas in the world.

Last Monday there was the most bluest, cloudless sky I had seen in a long time and Mt Taranaki with a lot of snow on it stood out the green forests and pastures like a beacon of hope.  We spent the day driving around the mountain following the coast with the gleaming sea on our right, and non-stop views of the mountain on our left.  Absolutely glorious! We called into many of Taranaki's small towns and villages.

In theory I was working.  I was photographing and researching old courthouse buildings for my next book.  Some photos were taken and interesting conversations had with locals in libraries and small museums around the district, including an interesting time spent with a 95 year old lady whose spryness and intellectual powers were undiminished by her age.  MW and I spent a most enjoyable day in beautiful natural surrounding. 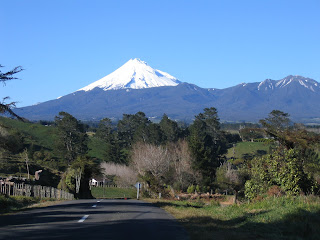 Monday last week was definitely one of those memorable days which made me realise, not for the first time, that pursuing one's interests and passions will always beat a day spent stressed and worrying in an office anytime. No income was made but, hey, there was enough loose change in the pocket for a cup of coffee and some lunch along the way.
Posted by the escapee at 15:27 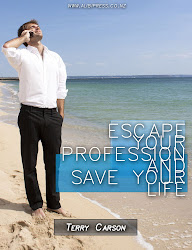